Shall We End Child Abuse OR Just Change The Definition

Shall We End Child Abuse OR Just Change The Definition

There was a flurry of news reports today about legislation submitted by Kansas Rep. Gail Finney to allow parents to hit their children harder.  This bill would allow a parent to hit the child up to 10 times, hard enough to cause redness and bruising!

What is the motivation behind legislation that puts children at risk?

Rep. Finney defended the legislation saying, “Corporal punishment is already allowed by law in Kansas.  [We’re] just trying to get a definition, because what’s happening is our kids and some of our law-abiding parents are entering into DCF (Department of Children and Families) and law enforcement custody when it could have been avoided.” They say the idea is to restore parental rights and discipline.

In written testimony Attorney, Britt Colle who drafted the bill said, “Children have become fully aware of what they can legally get away with and play their parents off against each other and authorities. They can act out of control and get away with it because they can play the abuse or battery card and also get a change of custody to a more lenient parent.”

The motivation behind this misguided bill appears to be to prevent family involvement with Child Protective Services and to exercise greater control over unruly children.

Reducing child abuse investigations can be accomplished essentially one of two ways. Either loosen restrictions on assault of children so that there are fewer cases that meet criteria for abuse OR make a genuine effort to prevent child abuse.

Which would you choose? 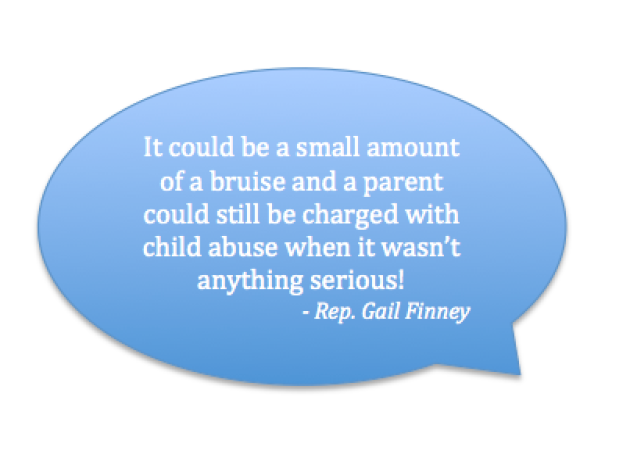 In an effort to avoid the upset of parents being criminalized for harsh punishment, Rep. Finney is all too willing to accept bruises on a child.  Would she be as willing to accept a husband leaving a small bruise on his wife’s face?  I doubt it, considering she sponsored a bill in 2009 on equal rights and no discrimination based upon sex.

We can breathe a sigh of relief for now, because Representative John Rubin just announced, “the bill is essentially dead.” It was a close call for Kansas’ children, but thankfully there was a public outcry against the bill. But how does a bill like this even gain the momentum to reach committee, let alone make national news? Is this bill a reaction to a fear of parents being punished by the Department of Children and Family Services (DCFS)? After all, the purpose of the DCFS isn’t to prevent child abuse.  These emergency systems are set in place to identify child abuse after it has already occurred in an attempt to intervene and prevent it from happening again.

When does the parent become involved with DCFS?  Once the harm has already occurred!  By the time a parent has escalated to the point of meeting the criteria for a child abuse investigation, the parent is much less capable of correcting their abusive parenting methods.  Why is this? For one, in most cases there is an established pattern or habit of poor parenting practices, abuse or neglect, and secondly the parent is now likely to feel defensive and in a position to defend themselves rather than to honestly share their struggles and receive support.  By the time a parent is in the system, we’ve missed the opportunity to establish a trusting relationship between the helper and the parent, which is the foundation to learning.  Parents under investigation have an adversarial relationship with DCFS, at best!

Let’s face it, DCFS is not in the business of child abuse prevention

We would be talking to teenagers in school about parenting practices, alternatives to spanking and yelling, the neurobiological capabilities of little children and how to create a secure attachment.  These lessons would be offered to pregnant mothers, and would extend into the first five years.  Services would be available before the head start requirement of age 3.  By the age of 3 we’ve already missed a huge window of opportunity for healthy brain development and attachment.  Let’s face it, by then parents are already spanking their children! A third of all parents spank before a child’s first birthday and the frequency is the greatest during the toddler years.  These early parenting practices are laying down the neurological and psychological framework that increases a child’s risk for behavioral problems later on.  RESEARCH is conclusive — we know spanking is destructive.  Spanking is linked to increased aggression, a myriad of mental health problems, and a higher chance of domestic violence as an adult.  The list of negative risks is extensive, and yet there is not one study showing positive long-term results from spanking. The question is, what should parents do instead? We need to offer them ALTERNATIVES.

If we really want to help parents avoid involvement with DCFS, we need to intervene early.  We need to shift our paradigm to focus on pregnancy, infants and toddlers. Here is an interesting review of the importance of policy reform focusing on the first three years.

Our society has treated the abuse, maltreatment, violence, and chaotic experiences of our children as an oddity that is adequately dealt with by emergency response systems—child protective services, criminal justice, foster care, and alternative schools—to name a few. These services are needed and are worthy of support—but they are a dressing on a greater wound.

Legislation to Allow for Harder Spankings